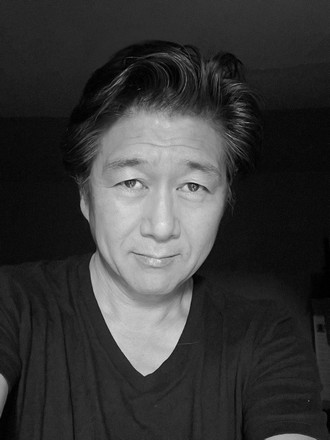 Keitaro Yoshioka was born and raised in Tokyo, Japan. He came to Boston in 1982 and attended the School of the Museum of Fine Arts, Boston.
While he was in school, he won the Boston Globe Photo Contest Award, Best of American College Photography Annual Award, and his work was exhibited at the New Wave International Photography Exhibition in Paris, France, as well as galleries in New York.
After completing both undergraduate and graduate programs at the SMFA, Keitaro started working at the Polaroid 40"x80" room-sized camera studio at the Museum of Fine Arts, Boston as a photographer. He has worked with Chuck Close, Evergon, Marie Cosindas, Ulay, and many other established European and American artists with this camera. He has also photographed well-known art collections of the Museum of Fine Arts, Boston, and has traveled in the United States and Europe photographing notable works of art. He was involved with Picasso's Guernica exact size/color photographic reproduction project in Madrid, Spain.
After ten years of working at the Museum of Fine Arts, Boston, Keitaro went independently. He has been working as an architectural/interior design photographer and educator.
His corporate clients include Cisco Systems, Dentsu, Genzyme, Google, Fidelity, Harvard University, Hitachi, IBM, The Italian Trade Commission, Lotus, Microsoft, P&G, Payette, Steffian Bradley Architects, Shepley Bulfinch, Friedrich St. Florian Architects, Divine Design Center, and many other corporates and interior design firms.
Keitaro's work has been featured in Metropolis Magazine,
Architects Newspaper, The New England Home Magazine, Boston Globe, Boston Design Guide, Boston Common Magazine, Boston Magazine, Boston Home Magazine, and Modern Luxury Interiors magazine.
Keitaro is a recipient of the Best of Houzz Award 2021, 2020, 2019, and 2018.
In addition to the architectural photography business, Keitaro is a faculty member of the photography department at the Massachusetts College of Art and Design and Boston Architectural College.
He has also taught at Boston University CDIA. He has given a visiting lecture at Emerson College and many other photography institutions.
Keitaro was one of the commencement speakers at the New England School of Photography class of 2011, 2013, 2015, and 2018.
Keitaro was invited to show his art work in L'Association CONTRASTES Arts Plastiques à Sartrouville
Biennale PHOTOGRAPHIE et SCULPTURE "Formes et Lumières" ESPACE SAINT-PAUL 19 rue des Rosiers à Sartrouville France in October 2015.
Six of Keitaro's panorama images were selected as winners of the EPSON International Pano Awards 2013, and his winning images were exhibited in Australia.
He has won the Epson Color Imaging Grand Prix Award four times in the past, and his winning images have been exhibited throughout Japan.
He had a solo exhibition at the Bumpus Gallery in Duxbury, MA, and received the Conant Award (the best show of the year) from Bumpus Gallery Duxbury MA.
He received a grant from Genzyme Corporation and had a group show at the Genzyme Corporation in Cambridge, MA. His work was shown at JAANY Annual Exhibition in New York, NY.